"Battle over the Reich"
Oil on Canvas 30" x 30" © Troy White 2008 FOR SALE
This painting is from the Rotational Series
Stafelkapitan Wilhelm Schilling of 9./JG 54, recovers after a head on pass through a formation of B-17s on 20 February 1944. On this, the first day of "Operation Argument" which came to be called "Big Week", Schilling was slightly wounded in the head when return fire from the American bombers hit the cockpit of his Me 109G-6.

For Schilling the war was a long one. He scored his first victories in 1940 during the Battle of Britain and moved to the Russian Front along with JG 54 where he scored 55 victories. He was wounded in late 1942 and after convalescing his unit had been posted to Germany in order to help counter the daylight bombing raids being carried out by the US 8th Air Force. Schilling survived the war having flown a total of 538 combat missions wherein he tallied up 63 victories including three four-engine bombers. 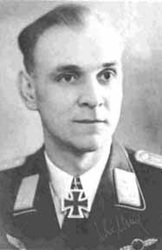 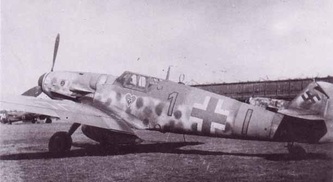 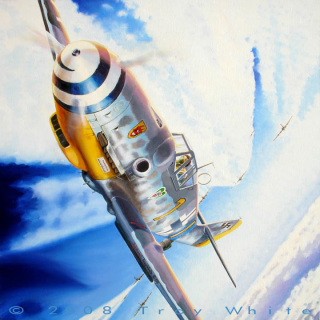 Battle Over The Reich
Open Edition Canvas Giclée Print. Image size: 18"x18"
Stafelkapitan Wilhelm Schilling of 9./JG 54, recovers after a head on pass through a formation of B-17s on 20 February 1944 in this fully rotational image.
$
165.00
Visit Troy's profile on Pinterest.