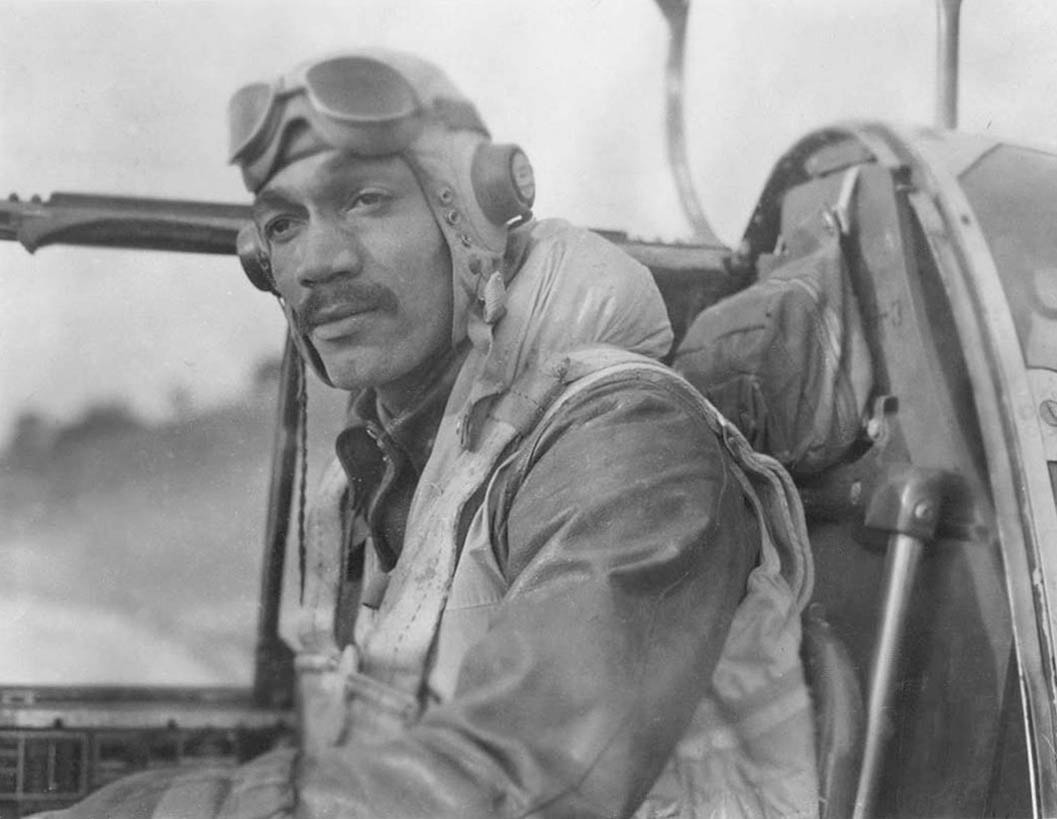 "I never thought about air-to-air combat as a big problem. I looked for it." 1st Lt. Lee "Buddy" Archer 302nd FS.
Although Lee Archer did not achieve official ace status by shooting down at least five enemy aircraft he is listed in Stars & Bars - A Tribute to the American Fighter Ace 1920-1973 by Frank Olynyk. Disputation about his ace status has fuelled many debates so that aside from General Benjamin O. Davis, Lt. Colonel Lee Archer is possibly the most famous of all the Tuskegee Airmen. The Tuskegee Airmen were first Negro pilots in the USAAF and first squadron to see combat was the 99th which was sent to North Africa in 1943. When there were enough pilots the 322nd Fighter Group was formed. It was comprised of the 100th, 301st and 302nd Fighter Squadrons. The 322nd Fighter Group first saw combat in early 1944 and were equipped with the Bell P-39 Aircobra. Soon they transitioned to the Republic P-47 Thunderbolt before finally moving on to the North American P-51 Mustang. In July 1944, the 99thFS joined the group making the 332nd the only group in the USAAF that was comprised of four squadrons.

Born on Sept. 6, 1919, in Yonkers and raised in Harlem, Archer left New York University to enlist in the Army Air Corps in early 1941 but was rejected for pilot training because the military didn't allow Negroes to serve as pilots. The Tuskegee program began officially in June 1941.  Archer re-applied and entered the Army in November 1941, initially receiving training as a telegrapher and field network-communications specialist. In December 1942, he was accepted into aviation cadet training and reported to the Tuskegee Army Airfield in Tuskegee, Alabama. Archer graduated number one in his class, 43-G was rated a pilot and commissioned a Second Lieutenant on 28 July 1943.

Lt. Archer was assigned to the 302nd Fighter Squadron, 322nd Fighter Group and deployed with the Group to Italy. They arrived at Taranto in the last week of January 1944. The unit flew the P-39 Aircobra before transitioning to the P-47D Thunderbolt and then to the P-51 Mustang. A natural pilot, Lt. Archer teamed up with squadron mate Captain Wendell O. Pruitt on many missions. They became known as the “Gruesome Twosome” and flew similarly marked Mustangs with a Zoot Suited "Hep Cat" painted on the rear fuselages.

When asked about his thoughts on racism in America he responded,  “I did feel it was ironic that we were fighting a fascist country for one that was, in our estimation, almost as bad. You wondered whether it was worthwhile but I thought that Hitler and Germany were a greater risk to us as black people than the racism in America. It was a more virulent type and I was very set on doing everything I could to stop it. I always thought when this is over They’ll change”.

Archer was promoted to First Lieutenant in August 1944. His most successful aerial encounter came on 12 October 1944 when he shot down three Me 109s. After the end of WWII Archer remained in the Air Force. He also flew combat missions during the Korean War and eventually retired from the United States Air Force after 29 years of service. 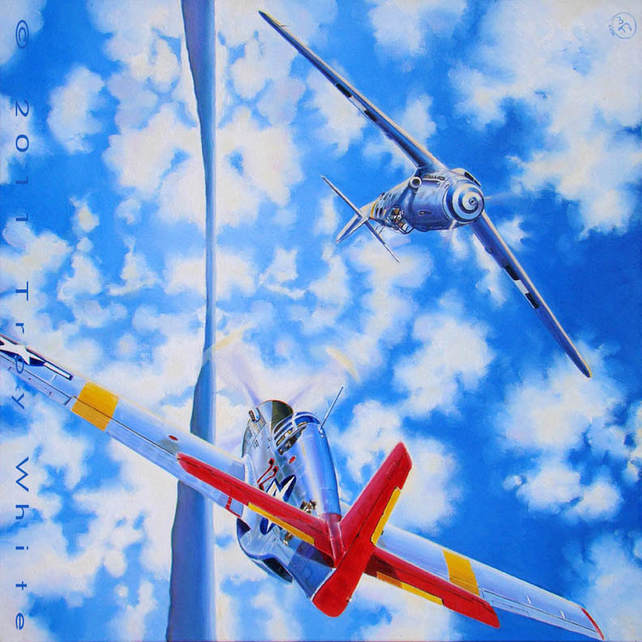 "Showdown at Lake Balaton"
Oil on Canvas 30" x 30" © Troy White 2012 For Sale.
This is the first rotational painting in which I have utilized a flat horizon line rather than one which is at a tilt. The reflection of  the sky in the water serves as a Trompe-l'œil effect.

"Showdown over Lake Balaton" is the 7th in the rotational series and the 6th square rotational painting. The painting depicts Tuskegee Airman Lt. Archer in a head-on pass with a Hungarian Me 109 from No. 101 "Puma "Squadron on 12 October 1944. At that stage of the war the average Hungarian fighter pilot was better trained and more experienced than his Luftwaffe counterpart. This was due to the terrible attrition suffered by the German fighter pilots since mid 1943. Lee Archer shot down three of the Hungarian Messerschmitts in the span of about ten minutes.
Ace Status Dispute

Controversy has surrounded Colonel Archer for years. Though only officially credited with four aerial victories, one less than the required five, Lt. Colonel  Archer was given the title Honorary Ace by the American Fighter Aces Association. Whenever there is mention of a 5th victory historians and aficionados take sides to argue the point. One story has it that the victory in question occurred on 18 July 1944 the day he scored his first victory over Memmingen, Germany.  Supposedly a second kill on 18 July was never credited to him.  As the story goes, after shooting down the first 109, Archer spotted another one and went after it.  One of his squadron mates also spotted the plane and pursued it with Archer. After chasing it for some time, Lt. Archer got within range and fired, mortally wounding the Messerschmitt. As it headed toward the ground his squadron mate, who'd almost pulled even with Archer, fired as well: "for the hell of it," according to Archer. Conspiracy theorists say that Lt. Archer was originally given full credit for this second kill of 18 July but that three months later, when he scored a triple on 12 October, the second victory was awarded to the other flier. They maintain that detractors of the Tuskegee Airmen in positions of power in the USAAF wanted to prevent Archer from being America's first black ace of WWII.

In Stars & Bars Frank Olynyk states "He is credited with 5 victories in the book The Tuskegee Airmen: The extra victory is a Me-109 listed on July 20, 1944.There is no reference to this victory in the mission reports held in the National Archives or at Maxwell AFB, nor is a flight listed for that date on his Form 5. Tuskegee Airmen does not specify their source. Another document shows four victories on Oct 6, 1944  (or Oct 10? ), and a victory for a H. W. archner on July 18 1944. this would seem to be a confused mixture of HW Warner and LA Archer, both of whom claimed victories on July 18." 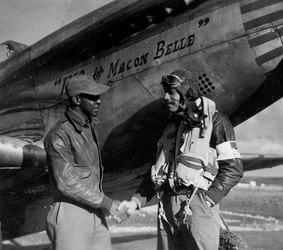 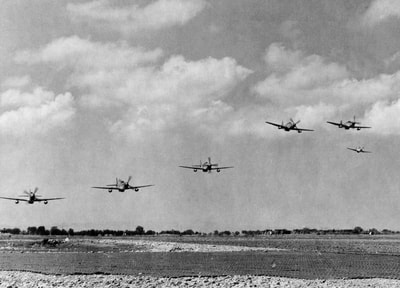 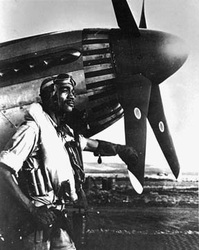 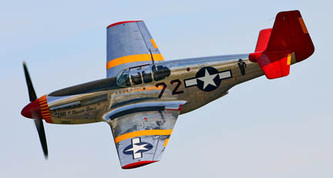 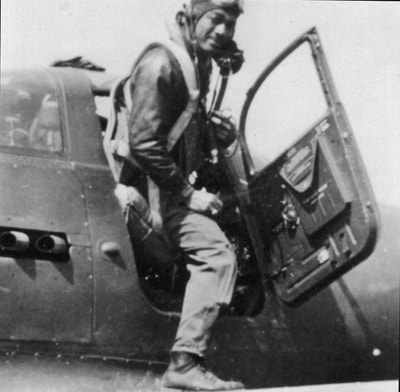 For the Record
Colonel Archer flew 169 combat missions during his time with the 302nd flying cover and escorting long-range bombers as well as strafing missions against enemy ground targets. He is officially credited with the destruction of 4 enemy aircraft in aerial combat (all Me 109's) plus 6 more enemy aircraft on the ground while strafing enemy airfields in August 1944. Archer completed his combat tour and returned to the USA in January 1945. He earned the Distinguished Flying Cross, the Air Medal with eight Oak Leaf Clusters during WWII, a Commendation Medal (Postwar) and received special citations from Presidents Eisenhower, Kennedy and Johnson, along with the Director of the CIA. Archer retired from the Air Force as a Lieutenant Colonel after 29 years of service  and resided in New Rochelle, N.Y.. He was among the group of Tuskegee Airmen invited to attend President Barack Obama's inauguration in 2009.

Also in 2009 Archer served as a technical adviser for the George Lucas film "Red Tails". He died of cardiac complications on 27 January 2010 while the film was in post-production and was buried at Arlington National Cemetery. 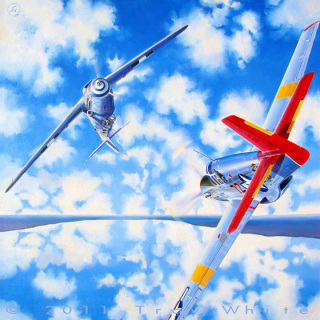