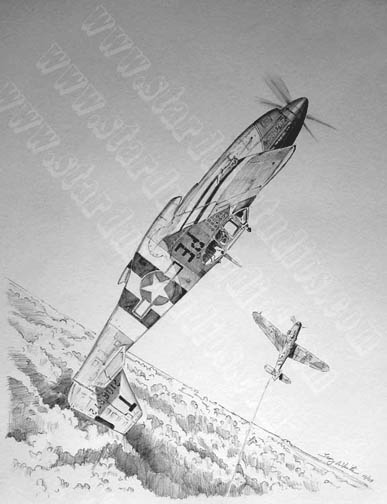 
John F. Thornell Jr. was born in Massachusetts in April 1921. Jack  joined the Army in July 1940 and was a Sergeant when the Japanese attacked Pearl Harbor. He commenced his flight training in January 1942. He won his wings and was commissioned as a pilot in February 1943. In April he was assigned to the 328th Fighter Squadron of the 352nd Fighter Group.  The 352nd deployed to England and was attached to the 8th Air Force based in Bodney. The group was equipped with the P-47 Thunderbolt fighter and started flying combat missions in September 1944. Jack scored his first of 5 victories in the P-47D on January 30, 1944.   His unit converted to the P-51B in April and Lt. Thornell racked up 13 more victories before he completed his tour. Thornell's highest scoring day was on the May 8, 1944 escort mission to Brunswick Germany when he bagged three Me109s. He was awarded America's second highest award for that misssion; the Distinguished Service Cross. On that day his Group set an ETO record by scoring 27 confirmed victories was earned a Distinguished Unit Citation . With the July 11th show to Berlin Jack logged his 300th combat hour and rotated home to the USA.  His final score was 17.25 air and 2 ground victories. Lt. Thornell was awarded the Air Medal with five Oak Leaf Clusters, Distinguished Flying Cross with five Oak Leaf Clusters, the Silver Star with Oak Leaf Cluster and the Distinguished Service Cross. Thornell remained in the Air Force after the war and retired as a Lt. Colonel in 1971.

Originally drawn in 1998 the "Over the top" drawing eventually evolved into my painting "The Kidd". 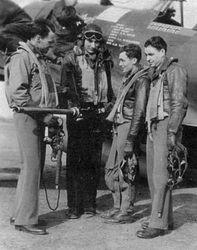 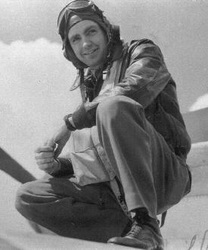 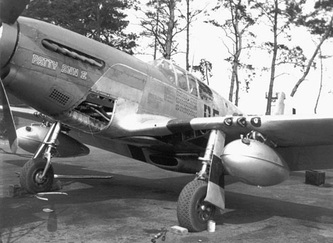 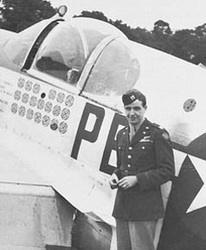