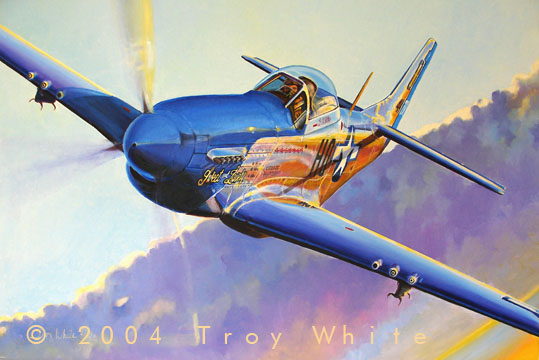 Lt. Cuthbert A. "Bill" Pattillo banks his P-51D" Sweet & Lovely" HO-O 44-13905 as the sun sets in the spring of 1945. Bill and his twin brother Buck joined the 352nd FG in December of 1944. Bill was assigned to the 487th squadron and Buck to the 486th squadron. On April 10, 1945 Bill attacked an Me-262 jet fighter near Ulzen, Germany as it was attempting to land and shot it down. He also damaged a second Me-262 on the same sortie. On April 16th the Bluenosers went on an epic strafing mission and Bill destroyed three FW 190s, 2 Me 109s and a Ju 88 but was hit by ground fire and had to crash land in a field destroying his first "Sweet & Lovely" HO-Y 44-11556. He managed to evade capture and made his way back to Bodney and was assigned HO-O, the subject of the above painting. 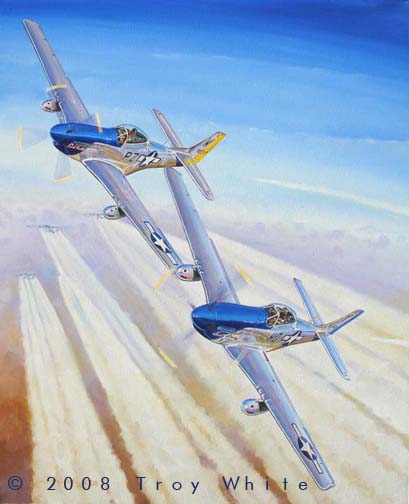 "Throw a Nickel in the Grass"

This painting depicting the Pattillo twins carving across the bomber stream was commissioned by Grady Lisk with the intention of making a short run of prints so that he could present both of the brothers one as a surprise gift. The title was derived from the Air Force song of the same name, with which Buck and Bill entertained many an audience during 352nd FG reunions. 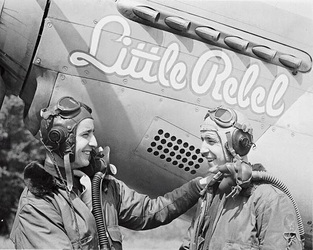 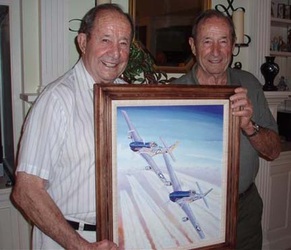