Squadron Leader Chesley Peterson of No. 71 Eagle Squadron is depicted returning from a sortie in June of 1942.

Chesley “Pete” Peterson was born in Salmon, Idaho, on 10 August 1920. After completing high school he joined the Utah National Guard and attended Brigham Young University but quit at age 19 at the end of his sophomore year. He forged a birth certificate to get into the US Army Air Corps pilot training program in November 1939. He went to San Diego, California for primary flight training, then went to Randolph Field in San Antonio, Texas for basic instruction but washed out. “When I saw the ‘lack of flying ability’ on my record I thought I would never step into an airplane again”. He then went to work at the Douglas Aircraft factory in Santa Monica, California where he met Colonel Charles Sweeney, who was clandestinely recruiting pilots for the Royal Air Force. In July 1940 Pete joined the RAF, was awarded his wings with the rank of Pilot Officer on October 15, 1940 and joined the newly formed 71 Eagle Squadron a month later. 71 Squadron was made up of American volunteers in the RAF and were initially part of 12 Group which was responsible for home defense and did not fly over German held territory. Because of illness and frequent Squadron Leader changes, P/O Peterson was practically running the outfit by the end of January 1941.

Eager for more combat action Peterson disregarded proper channels and went directly to the 12 Group Commanding Officer to request 71 Squadron be transferred to 11 Group. Instead of reprimanding him for disregarding rules, Peterson was promoted two grades to Flight Lieutenant.  F/L Peterson scored an unconfirmed victory over an Me 109 while flying a Hawker Hurricane on 6 July 1941.  His first confirmed victory was achieved on 7 September 1941 after the squadron had converted to the Supermarine Spitfire. In November 1941 he was made Squadron Leader at age 21.

Peterson became an ace on 1 June 1942 when he shot down an FW 190 from 15,000 feet near Bruges. “At 22,000 feet over the target area I saw about six FW 190s starting to attack 111 Squadron who were below and to my port. As I dived the E/A tried to turn into us and foil the attack I closed my throttle completely and came from quarter to line astern, turning with the E/A. I opened fire from about 100 yards for three seconds with both cannon and machine gun and saw my cannon enter the wing root and cockpit. A stream of white smoke (presumably petrol) poured from the side and slightly back of the cockpit. I gave him another 1 second burst from about 50 yards. He turned on his back and went down in flames. This was confirmed by White II. I regained height to 20,000 feet and flying under 350 Squadron when 4 Spitfires above me were attacked by about eight FW 190s. I shouted warning and pulled up into them and fired at the leader who was already firing at the Spits from short range. The remaining six or so came down on me. I did a sharp skidding turn into them but one shot a mighty big hole in my wing and all the rest were firing at close range all around me so I fired with machine gun only at one E/A and as he broke away and down I followed him, still firing. I saw De Wilde strikes and small pieces flew off his tail section. As I was then out of ammo I stuck my nose down and came hell for leather home with about three or four firing at me from long range until I was well out to sea.” Later that evening Peterson was tasked to lead 71 Squadron on a bomber escort mission to Flushing. With his plane down for repairs he grabbed another one, Spitfire MkVb, AB199 coded XR-L and took of. It his return to base in this airplane that is depicted in the painting  “Puesta del Sol”. 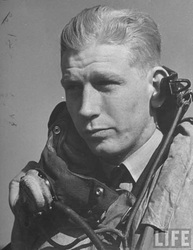 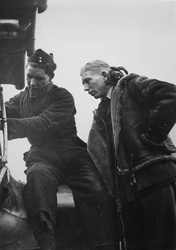 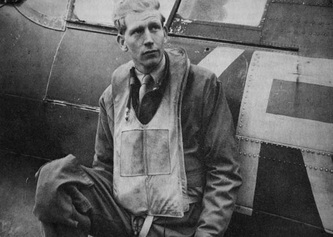 On 19 August 1942 the three American Eagle Squadrons, 71, 121 and 133 for the first time participated in a combined operation during Operation Jubilee covering the Allied landings at Dieppe, France. S/L Peterson led the first two missions. On the first mission he damaged a Junkers Ju 88. After returning to base for fuel the spitfires returned to Dieppe and this time S/L Peterson shot down a Ju 88 but the German bomber’s rear gunner hit Peterson’s Spitfire which caught fire forcing him to bail out immediately landing in the sea. He was quickly picked up by Royal Navy boat which later came under by Nazi fighters. In the strafing attack a fellow RAF pilot who was sitting right next to Peterson was killed. This mission was cited in Petersons DSO award. After the three Eagle Squadrons were absorbed into the USAAF they became the 4th Fighter Group and had their unit numbers changed to 334, 335 and 336. 71 Squadron became 334 Squadron. Peterson was given the rank of Major and continued on and took the post of executive officer of the entire 4th Fighter Group and in October he was promoted to Lieutenant Colonel. The 4th Fighter Group continued to fly the Spitfire in combat through March of 1943 when they converted to the Republic P-47 Thunderbolt. Two weeks later, on 15 April 1943 the 4th Fighter Group scored the first ever victories in the new fighter. Major Peterson was the second pilot in history to score a victory with the P-47. The first victory went to 335 Squadron Leader Major Don Blakeslee. In the combat Major Peterson shot down one FW 190 which was seen to go down into the sea in flames near Ostend Belgium. After downing his victim Peterson set course for home but a cylinder head in his engine blew and his P-47 caught fire and he was forced to bail out. His parachute did not fully deploy before he hit the water but he survived the impact with only two black eyes and a cut lip to show for it. His wingman Captain Tom Andrews circled above him for 45 minutes until he was picked up by an RAF Air Sea Rescue flying boat. England. In July 1943, while continuing to fly combat missions with the 4th. Pete was assigned to the 8th Fighter Command and later the 65th Fighter Wing, England, as assistant operations and training officer.  On 20 August 1943 Peterson was made Commanding Officer of the 4th Fighter Group and in October promoted to full Colonel—the youngest member of the U.S. Army Air Forces at the age of 23 to hold such a high rank. On his return from combat in late 1944, Colonel Peterson attended the Command and General Staff School at Fort Leavenworth, Kan. Upon completion in March 1945, he was assigned as commander, Dale Mabry Field, Tallahassee, Fla. In August of that year, he was appointed chief, Air Attaché Branch, Headquarters Army Air Forces, Washington, D.C.

Pete Peterson remained in the Air Force until 1 August 1970, retiring nine days shy of his 50th birthday with the rank of Major General. He died at the age of 69 on 28 January 1990 at March AFB in Riverside, California, and was buried with full military honors at Riverside National Cemetery. 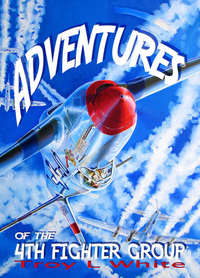