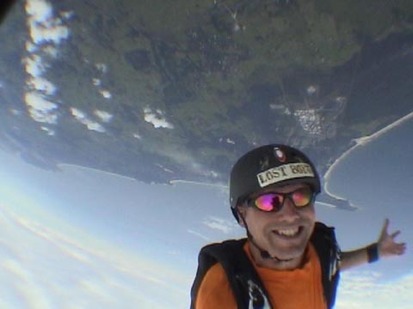 Troy over Skydive Byron Bay in Australia.
Troy White is a graduate of Georgia’s Berry College and holds a Masters in Fine Art Degree from Florida State University. He is also a licensed pilot and skydiver with over 3,500 jumps logged.

White’s first solo exhibition consisting entirely of aviation paintings and sculptures dates back to 1978. His work is familiar to readers of numerous aviation publications and in addition Troy has authored three books. Kidd Hofer—The Last of the Screwball Aces which has nearly sold out of its first edition, Gold Star Aces Volumes I & II, and the eagerly anticipated Adventures of the 4th Fighter Group published in July 2015.

Troy's paintings hang in public, corporate and private collections world-wide and his work has been exhibited in museums and galleries around the globe. His “Out of the Blue” show toured Australia in 2006-07 with much fanfare and was sponsored by Rolls Royce Aviation, Qantas and Fosters. Troy's Exhibition AZUL VIVO at Uruguay's elegant Punta del Este during the 2013 summer season  was also supported by Rolls Royce and makers of fine wine Pagos de Atlantida.  Azul Vivo was White's first one man exhibition/retrospective in Latin America. Troy had two  exhibitions in 2019, occupying an entire floor for "Outside In" at St. Vincent's Private Hospital at Kangaroo Point, Brisbane, Australia, and "Aeronaut" from October 5th until December 3rd at the Redland Museum Art Gallery, Cleveland, Australia.

"Having mastered atmosphere in more than one way Troy White instils a rare sense of drama and eventfulness into his remarkably intense scenes of aviation instants. His almost eerie ability to convey tension and anticipation while toying with the viewer’s perspective and maintaining accuracy and clarity in his composition elevates his work above category....With his new ‘Rotational Series’ White has broken new ground with his use of multiple perspectives." New Art International

In Troy's own words...“The subjects of the majority of my paintings are inspired by a life-long interest in aviation in general. I enjoy painting all types of planes and their pilots but confess an affinity for historic military aircraft, especially aircraft from the WWII era. I like to use vivid colours and large canvases while focusing on portraying the more radical angles and manoeuvres of flight. I draw from my experiences as a pilot and skydiver to stretch beyond the flat and level world into the dynamic passion and freedom of the limitless sky. I strive to add an element of tension to each piece and draw the viewer into experiencing the sensation of flying through my artwork.”