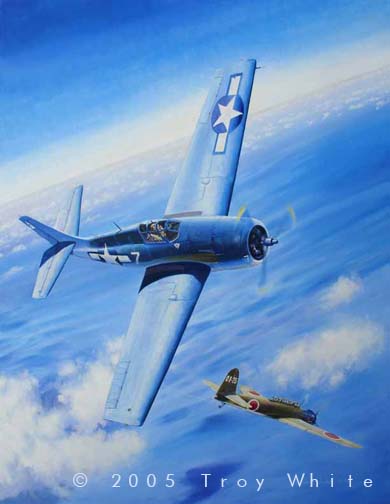 Lt. Leo Martin Ferko of squadron VC-4 downs a Nakajima B6N "Jill" from his FM-2 Wildcat while defending his carrier, USS White Plains, on Oct. 25, 1944 during the Battle of Leyte Gulf.

Leopold Martin Ferko was born on January 29, 1915 In Great Falls Montana.  After moving to California with his family he graduated from South San Francisco High School and Stanford University where he was a football star. After earning his Bachelors degree Ferko taught English and Mathematics at South San Francisco HS and coached the football team.

Leo joined the Navy on February 3, 1941. After earning his wings he was posted to Corpus Christi, TX where he served as a flight instructor. He was promoted to Lieutenant in October of 1943.  In June he found himself in Pearl Harbor where he was assigned to the Escort Carrier USS White Plains flying Wildcat fighters with Composite Squadron (VC) 4. VC-4 was composed of 16 FM2 Wildcat fighters and 12 TBM Avenger torpedo bombers.

Lt. Ferko scored all five of his victories in a three day period during the Battle for Leyte Gulf October 23 - 26 The Japanese knew they had to stop the Americans at Leyte in order to have any hopes for a negotiated peace.  The Battle for Leyte Gulf however came on the heels of the American naval victory during the Battle of the Philippine Sea which saw American carrier pilots shoot down 200 Japanese planes in one afternoon in what came to be known as the “Marianas Turkey Shoot”. The Japanese also lost three aircraft carriers and lost over 500 carrier and land based aircraft in two days.

On October 20, 1944, the U.S. Sixth Army, supported by naval and air bombardment from the U.S. Seventh Fleet under Vice Admiral Thomas Kinkaid, landed on Leyte, one of the large Philippine Islands. The Seventh Fleet was the largest invasion force seen to date in the Pacific war. In order to repel the invasion at Leyte the Imperial Japanese Navy decided to commit nearly its entire surface fleet to a campaign in Leyte Gulf against the U.S. Navy. The Japanese also pressed into service their “Special Attack Corps” which were mostly novice pilots sent on suicide missions with instructions to crash their planes into Allied warships.

Aircraft from White Plains provided air support for the troops and ASW and combat air patrols for the ships assembled in Leyte Gulf. On October 24, Lt. Ferko and his wingman Ens. Pool spotted a formation of 12 Japanese single engine aircraft. Ferko later related; “We were flying tactical combat air patrol at about 17,000 feet when we spotted 12 Oscars headed for Talcoban airstrip, which then was temporarily in American hands.”

With the sun at their backs the two Americans dove on the formation. Closing rapidly Ferko blasted the “tail-end Charlie”. According to Leo, “he just disintegrated. Then I turned slightly to the left and hit a second Oscar. I was so close on his tail, not more than 300 feet away when I let him have it.” 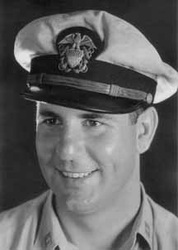 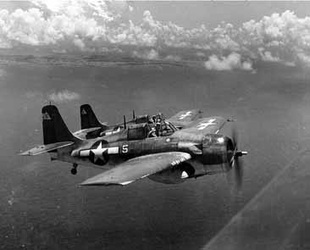 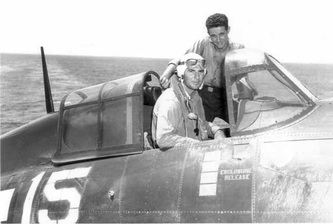 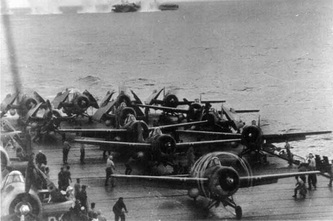 During this action a Jap plane got onto the tail of Ferko’s Wildcat and began scoring hits but before he could deliver the final blow Ens. Pool swung in and shot him off Leo’s tail. Having sustained damage to his elevator Lt Ferko was forced to make an emergency at Talcoban strip where the Japanese raid had left a pockmarked runway and several airplanes ablaze. “I had a tough time even getting to that field with my plane shot up but I finally made it.  It wasn’t comforting to se what a place I had to land on. Just as I set down the guns of a fighter plane which was burning on the strip started firing just a few feet over my head.”

They must have been able to repair the damage quickly for Leo was back aboard the White Plains the next morning for the official start of the Battle for Leyte Gulf. Ferko would recall; “During the big show of October 25th I flew seven hours. I’ve never been more tired in my life, not even after a football game.”
At dawn on October 25, only three escort carrier units of US Seventh Fleet remained off the east coast of Samar..At about 6:45 am a scout plane from the USS Kadashan Bay sighted four Japanese battleships and eight cruisers accompanied by destroyers approaching from the north White Plains was an element of "Taffy 3," the northernmost of the three units and closest to the approaching Japanese battle group. By 6:57 the carriers were ordered to turn into the wind and launch every available aircraft.  The stage was set for an epic battle.

VC-4 was in action all day long and Lt. Ferko saw his fair share of it. He was officially credited with two Nakajima B6N2 Jill’s in the protracted battle. At the end of the day, he found himself low on fuel and once again unable to make it back to the White Plains.  Instead, he was forced to land aboard the Kadashan Bay where he spent the night.  The next day, before returning to the White Plains, Lt. Ferko Flew with VC-20. He was over central Leyte when he shot down a Nakajima Type Ki-44 Tojo.

The four victories Lt. Ferko scored while flying from the White Plains accounted for 1/3 of the CV-4’s total.  For his part in the Battle for Leyte Gulf Leo was awarded the Distinguished Flying Cross. Leo retired from the navy as a Lt. Commander. He passed away on May 16, 1992 in his home town of South San Francisco, California. 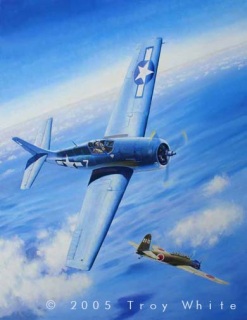