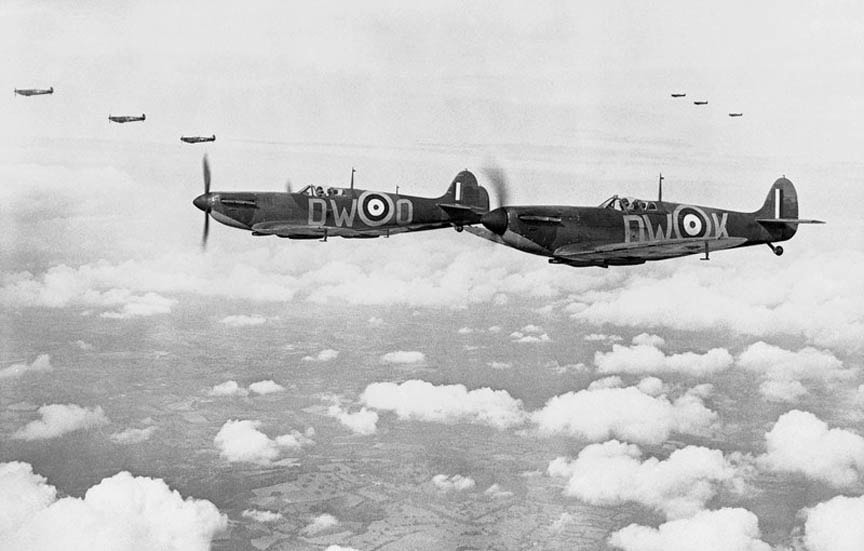 Most people are aware of the legendary history surrounding the Battle of Britain which took place between July 10 and October 31, 1940. Nothing less than the fate of all Europe was at stake that summer. In just a few short months Hitler had conquered Europe and had set his sights on Britain. All that stood between Britain and total Nazi domination were 1,450 young pilots. Many of the pilots had little or no combat experience and they were pitted against seasoned Luftwaffe pilots. Many of whom had gained valuable combat experience in the Spanish Civil War a few years earlier and in the Polish campaign and the Battle of France.

I have always enjoyed painting Spitfires but prior to 2010 I had never painted any from the Battle of Britain. So with the 70th Anniversary of the Battle looming I wanted to do something to honour the brave pilots who after Prime Minister Winston Churchill's famous speech became known as "The Few". Accordingly  I set myself the task of creating a dramatic and symbolic representation of that great aerial battle. The result was this fully rotational painting which I titled "Sod Off!" 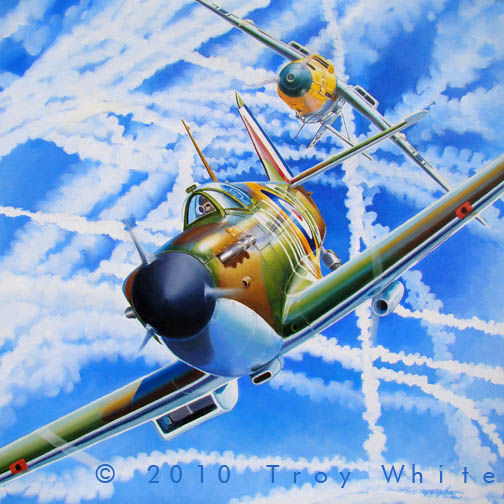 This painting features Sgt. Ronald F. Hamlyn of 610  Squadron
&
Ofw. Karl-Heinz Harbauer of JG 2
battling it out over England on 30 August 1940.

Click here to see a slide show of "Sod Off!" and other rotational paintings.
In "Sod Off!" I wanted to put my audience in the middle of a battle in which the outcome is questionable for the hero (as it was for England in August 1940) and utilise the iconography of vapour trails to help illustrate the unusual attitudes that are typical of any dogfight. During the summer of 1940 the English people looked aloft to see a phenomenon unique in history. Vapour trails from high flying aircraft criss-crossed and swirled in the skies making patterns delineating the battle. This emblematic image of the titanic struggle makes a perfect backdrop for the equally iconic Spitfire versus Messerschmitt theme.

An important requirement of this composition was that it be fully rotational, one that would work however the canvas is hung. I also wanted to portray actual people and machines and depict a specific moment in time.  I decided to interpret an event that took place between August 13 and September 15th which was the most critical phase of the battle.

The pilot of the Spitfire is Sgt. Ronald F. Hamlyn of 610 Squadron. 610 Squadron was part of 11 Group which operated from English bases closest to the English Channel and was the first line of defense against incoming Nazi raiders. 11 Group was commanded by the renowned Keith Park. Park was a New Zealander who, along with Chief Air Marshal Dowding was a major player in the victory of the Battle of Britain. Ronnie Hamlyn aka “The Pied Piper of Harrogate”, was one of the first RAF pilots to become an ace-in-a-day when he downed a Ju 88 and four Bf 109's in three sorties on 24 August 1940. For this feat he was awarded the Distinguished Flying Medal but for this feat he might have been in really hot water.

The previous day he had pranged his Spitfire while landing at Biggin Hill and on the morning of 24 August he was waiting to see his CO having been charged with negligence. As he awaited his fate the alarm bell went off and he scrambled to intercept the incoming Nazi raiders. During that sortie he shot down a Ju 88 and one of the escorting Bf 109's over Dover.  Upon landing he reported back to the CO's office but before he could be seen the alarm bell went off again and he had to excuse himself to scramble again. This time he shot down another Messerschmit. Once again he returned to the CO's office and once again the alarm bell sounded while he was waiting and once again he scrambled to intercept the incoming raid. This time he shot down two 109s over London. After landing he finally was seen by his Commanding Officer who sternly told him that he was recommending him for the DFM!

Sgt. Hamlyn's assigned aircraft for all of his Battle of Britain victories during and after 24 August was Spitfire R6891 DW-Q. Ronnie survived the war and rose to the rank of Wing Commander. 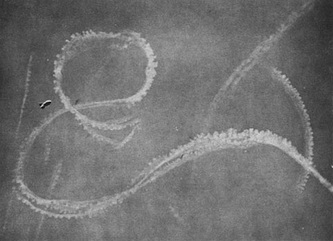 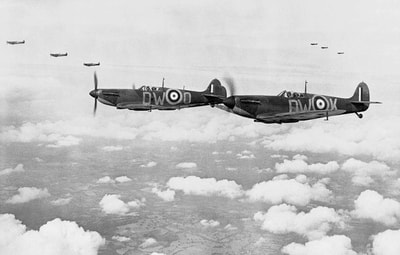 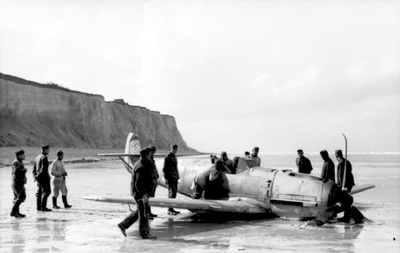 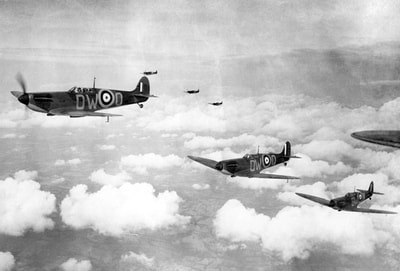 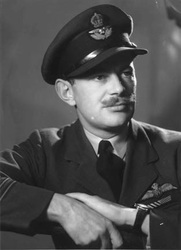 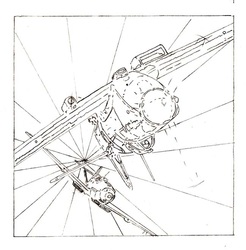 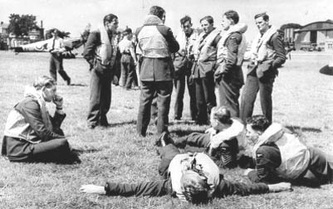 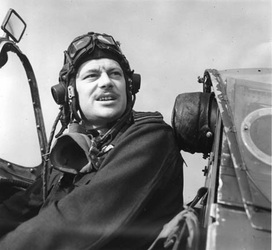 Although I would have liked to portray Hamlyn's big day in my painting, his combat report for 30 August perfectly matched the idea I had had for the composition of my painting. All that was needed was to find the identity of the Messerschmitt and pilot in my painting. The German pilot was Ofw. Karl-Heinz Harbauer of 4. Staffel, II./JG 2. He overshot Hamlyn who in turn shot him down in flames. Ofw. Harbauer bailed out but was killed when his parachute failed to open. The wreckage of his Bf 109E, WNr. 2765 "White 1" was salvaged during the battle but recently some additional fragments of the wreckage have been recovered. They can be seen at the Kent Battle of Britain Museum.

610 Squadron's base at Biggin Hill was hit hard on by Luftwaffe bombers the 30th of August and was temporarily out of commission. Repair crews worked through then night and by morning the base was more or less operational again. 610 Squadron which had been in combat constantly and had suffered 18 pilots killed or missing since May was sent north for a well deserved rest.

Ronald Fairfax Hamyln was born on 26 February 1914 in Harrogate. In 1936 he joined the RAF and began pilot training. The Spring of 1940 found  Hamlyn flying with 72 Squadron based at Church Fenton. After the evacuation of Dunkirk he joined 610 Squadron at Gravesend.  Hamyln was posted to 610 Squadron on the 6th of June 1940 and within a month had shared in the destruction of a Dornier bomber. As the battle moved into its critical second phase, the Nazis increased the tempo and the airfields of 11 Group were hit with heavy attacks. As Ronnie and his mates fought for their lives he added to his score. After bagging five Nazis on 24 August Hamlyn kept on going. He scored three more confirmed kills and a probable, all Bf 109's before the end of the month.

On August 30th, for the first time during the battle, Fighter Command flew more than 1,000 sorties in a day. Thirty-six Nazi airplanes were shot down but it was also one of the darkest days for the RAF. The radar stations of Foreness, Beachy Head and Pevensey were damaged. Over 50 RAF personnel had been killed on the ground (39 of these at Biggin Hill). Thirty-nine Spitfires and Hurricanes were destroyed and 10 pilots were killed. To date over 20% of the Fighter Command’s pilots had been killed. It simply could not sustain losses like this. 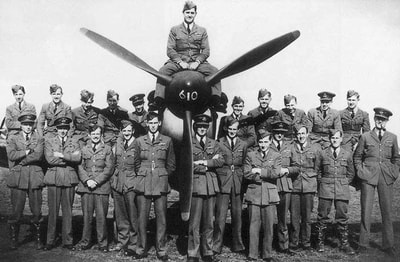 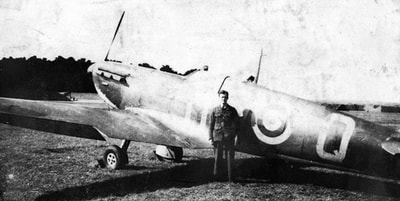 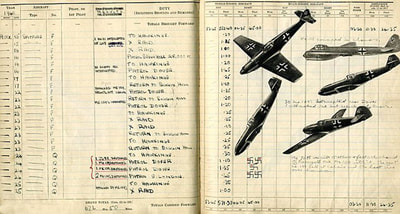 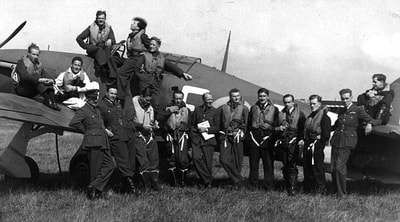 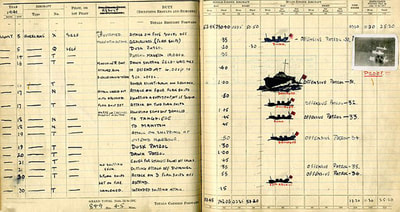 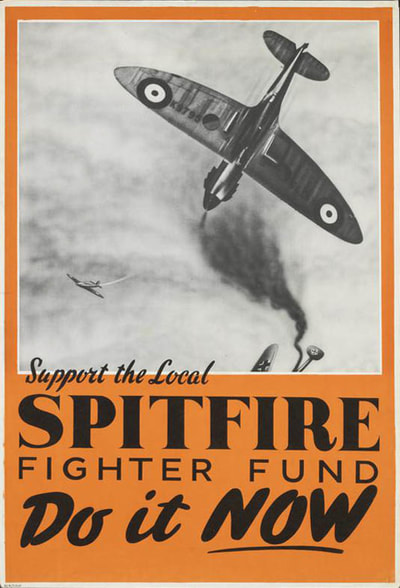 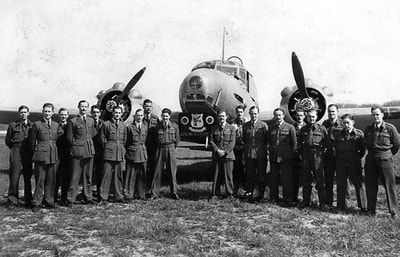 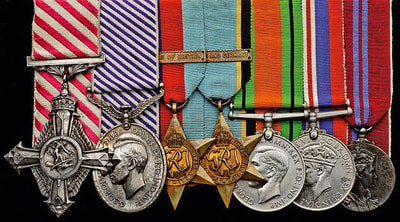 Fighter Command’s high losses of both new and veteran pilots coupled with the damage to aerodromes and radar stations brought England to the edge of defeat.  The country was in the gravest danger that it had been in since the Norman Invasion of 1066. Meanwhile Biggin Hill was in the dark and shut down. Repair crews worked through then night and by morning the base was more or less operational again but control of its sector was transferred to Hornchurch. It was with this grim backdrop that 610 Squadron was ordered to move north and become part of 13 Group far away from the hotly contested skies of the Southeast coast.

The onslaught against the RAF sector airfields continued for the following week and then the Luftwaffe changed strategy and began attacking London. This gave Fighter Command time to replace lost aircraft and pilots. 610 Squadron base with 13 Group was Acklington north of Newcastle. They remained there until December. Sgt. Hamlyn was personally commended by Winston Churchill for his exploits and was awarded the prestigious Distinguished Flying Medal (DFM). The citation read in part: "The pilot's feat of destroying five enemy aircraft in one day shows great skill, courage and good marksmanship". The DFM is the version of the RAF Distinguished Flying Cross (DFC) that was awarded to enlisted men. Hamlyn later was promoted to Flight Officer and transferred to 242 Squadron under the command of Douglas Bader, the famous legless ace. He shot down two more Nazi aeroplanes before his tour with 242 Squadron was up. He was then given command of 275 and then 276 Air Sea Rescue Squadrons respectively. He was awarded the AFC on 1 January 1943. Hamyln stayed in the RAF after the end of WWII retiring as a Wing Commander in 1957. In civilian life he worked for the Save the Children Foundation. Ronnie passed away in 1991. My rotational painting  is entitled "Sod Off!" which I imagine would have been the printable sentiments of Sgt. Hamlyn when he had the Hun on his tail.

Research data regarding Sgt. Hamyln, his victories and his aircraft has kindly been provided by Michael Lewis, Jonathan Tuckwell and Frank Olynyk. Lynn Ritger and Bill Espe provided historical data regarding Ofw. Harbaur and JG 2. 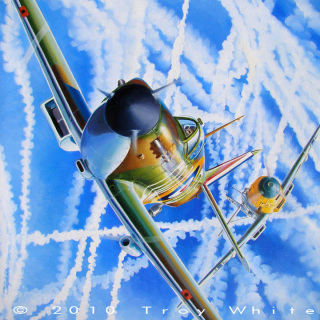