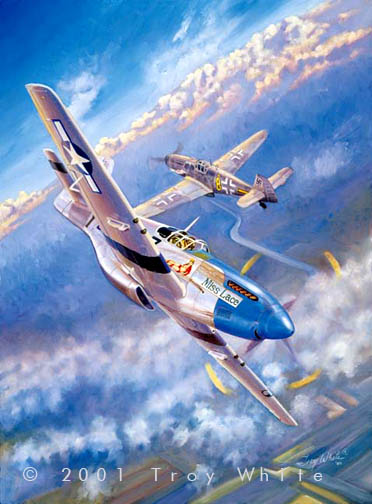 Lt Don "Mac" McKibben engages a Messerschmitt Bf 109 on April 19, 1944 during a mission to Kassel, Germany.  In the ensuing combat he shot down the German fighter.

One of aviation artist Troy White’s ‘Bluenoser’ series of paintings is entitled “Miss Lace’s First Encounter”, depicting Donald ‘Mac’ McKibben’s April 19th 1944 victory over an Me-109.   This typically fine work by White was commissioned as a surprise by Frank McKibben for his father.

Mac shares his thoughts with us, “She was a beautiful bird, and I’m tickled pink to have Troy’s faithful rendering.  I never thought I would own such an impressive piece of art.  Thank you Troy and Frank, what a thoughtful and generous surprise!  I’d like to think that someday one of my grandsons will pass it along to his grandchildren.  Recalling that mission, I want to point out that the encounter reports prepared by the pilots after they returned from a mission are more likely to be more accurate than those retrieved from our memory 60 years later. Here is what the report said:”

I was flying Blue Three.  As we approached the bombers’ initial point, I noticed 15 to 20 Me-109’s diving towards the box of bombers that had just turned to make its target run.  I called these E/A’s in over the R/T, but our squadron was in maximum climb to reach several contrails that were hovering in the vicinity.  At that point I noticed a Fortress going straight down, and at the same time one of the contrails crossed directly over me and I identified them as P-51’s.

Then a lone Me-109 passed by me on the left, going the other way.  I called and said I was following him and told the flight to follow me because it looked like all the enemy aircraft in the vicinity were on, or headed for, the deck.  As I wheeled onto the 109, he split-essed and I was able to keep a lead on him during this manoeuvre.  I fired once in an inverted position, but saw I was under-leading him.  He took no evasive action after the split-ess and I was able to close to about 100 yards at about two to three thousand feet.  My last burst caused numerous pieces to fly off the airplane.  I flew through the pieces and pulled up to avoid a collision.  I looked back and saw the pilot bail out.  The e/a glided, inverted, into the ground.

I climbed back up to about 15,000 feet and joined four red-nosed P-51’s (4th FG) and one red and yellow checker-nosed P-51 (357th FG).  The rest of my group was nowhere to be seen.  I then noticed that I had accidentally hit the “Off” button on my radio and that accounted for the fact that nobody followed me on my pass.  I continued home uneventfully. I claim One (1) Me-109 Destroyed. Ammunition Expended – 680 rounds.

Commenting on this story, Don McKibben had this to say: “As war stories go, this one is not remarkable...  But there was one element not mentioned in the official report that gave this incident special significance as far as I was concerned.”

Here, Mac’s modesty surfaces:  “In the winter of 1943-44, the 8th AAF was experiencing great frustration in dealing with German defense aircraft.   The German fighters wanted to get to the American bombers that were doing damage to their homeland.  They wanted no part of the roaming wolf-packs of 8th Fighter Command.  These Allied fighters were causing no real damage to Germany at that time, but could easily deplete the German fighter stocks.

“So, on-the-whole, the Germans simply stayed outside of the combat radius of the Thunderbolt, and laid-in-wait for the bombers.  Therefore, many missions were flown by the ‘Mighty Eighth’s’ fighter groups with no combat to show for it.  However, these efforts did limit the time the enemy fighters could attack the Eighth’s heavy bombers.   This aerial stand-off situation changed to Allied-dominance once the P-51s made the scene in the early spring of ’44 and the P-47s were plumbed with external drop tanks providing extended range and the bugs were worked out of the long-legged P-38s in the ETO.

“The 352nd Fighter Group went operational on September 9th, 1943.  In the seven months that followed, I put in about 100 operational hours, so-called ‘combat time’.  In all of that time, I never got close enough to an enemy aircraft for either of us to threaten the other. If my flight was protecting the rear end of the bomber stream, it was pretty sure that any German fighters in the area would be concentrating on the lead bomber formations way up ahead.   I spent a lot of time bird-dogging around in the wrong part of the sky.

“Of course, I know that sometimes our mere presence near the bombers helped keep the German fighters away from the B-24’s and B-17’s.  After all, they did refer to it as ‘escort duty’.  Still, I felt I should be doing more, if only to balance the books with our taxpayers on two P-47’s demolished while in my custody.

“I’m glad the painting shows the beginning of the episode instead of the end.  It doesn’t show ‘Miss Lace’s’ guns firing, or my adversary bailing out, although that might be exciting to the casual viewer.  For me, the most dramatic moment was when I first spotted the enemy aircraft diving towards me to my left.   This was it! .  Seven months of frustration had come to an end.  After all of my griping about not getting the breaks, it was time to put up or shut up.  It was time to see if ‘Miss Lace’ and I could do what we were sent there to do.  That tension filled moment was what Troy White captured in the painting I call ‘Miss Lace’s First Encounter’.”

Diligent Luftwaffe research work by Troy White, Lynn Ritger, and Charles Bavaroise, produced a listing of five German fighter crashes near Spangenberg for April 19th, 1944.   Of these, the events surrounding the actions indicate that Unteroffizer Rolf Lohmer of JG/If you 2 was Mac’s opponent.   Lohmer was killed-in-action later in the war in a dogfight over Ruhlerstwist.

You may wonder how ‘Miss Lace’ got her name.  After his P-47’s demise in a mid-air collision on March 8 1944, (see ‘The Day It Rained Thunderbolts') Mac pondered a name for his new mount.   The siren’s call was Milton Caniff's daily cartoon strip, "Male Call" featuring a fantastic blonde who reminded the men just what they were fighting for - his artwork depicting the curvy and luscious Miss Lace.  Why was the art on the left side of the aircraft, traditionally the crew chief’s domain?  The P-51B parked along the west edge of the perimeter track (peri-track) bordering the field’s west side at Bodney.  The aircraft usually faced north, so the crew chief’s side was exposed the majority of the time.  No need to waste seductive Nilan-Jones-painted artwork on the trees of the “Great Wood” at Bodney. 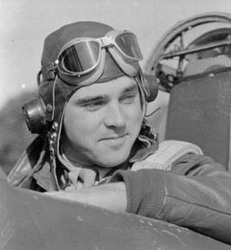 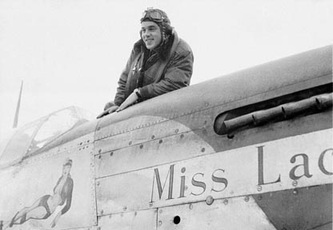 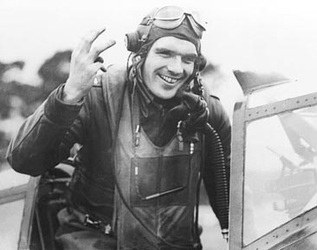