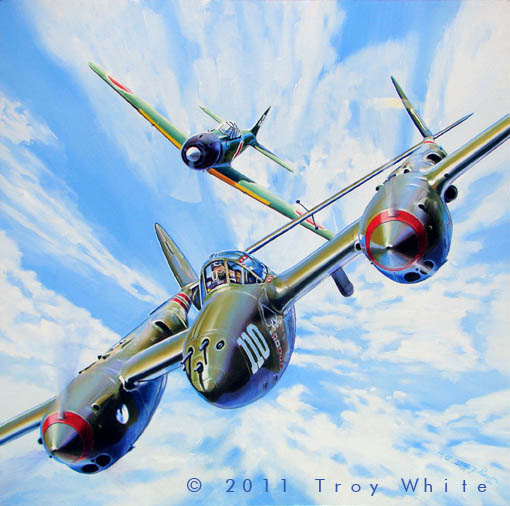 In "Agua Caliente" Captain Tom McGuire is depicted seconds before being shot down on 17 October 1943 and earning a Purple Heart. He survived and went on to become America's number two scoring ace of all time.

Tom McGuire was born in Ridgewood New Jersey on August 1, 1920. He graduated from High School in 1938 in Sebring Florida. He attended Georgia Tech University in Atlanta GA for three years before enlisting in the Army Air Corps at in 1941. He was commissioned a 2nd Lt. on February 2, 1942. He served in the  Aleutian Islands flying the P-39 Airacobra from June 14 to October 16, 1942.  Returning to the lower 48 in December 1942, he transitioned to the P-38 Lightning. In March 1943, he was shipped out to the South Pacific as a replacement pilot with the 49th Fighter Group, 5th Air Force. He flew his first combat mission with the 49th on April 22. In June Tom  transferred to  the 475th Fighter Group which was created at Amberly Field near Brisbane Australia in May of 1943,  He was assigned to the 431st Fighter Squadron. On August 18, 1943, McGuire was part of a group flying top cover for bombers striking at Wewak, New Guinea. Nearing their target, the fighters were attacked by Japanese aircraft. During the battle, McGuire scored victories over two A6M "Zekes” and one Ki-61 “Tony”. Three days later day, near the same location, he splashed two more “Zekes” and made ace. "Zeke" was the allied code name for the Mitsubishi A6M Navy type 0 carrier fighter.   "It was a common mistake for American pilots at the time to confuse the A6M Zero with the Nakajima Ki-43 Oscar, and for the most part they encountered Ki-43s over Wewak.  The JAAF and JNAF had agreed that New Guinea was the province of the army while areas over the sea and New Britain were primarily the responsibility of the navy.  McGuire almost certainly claimed Oscars in August 1943." -- John Stanaway

By the middle of October his score had risen to 11 confirmed victories. On the 17th of October McGuire had one of his biggest days but nearly lost his life in the process. Here is his encounter report for that day.

"We were at 23,000 feet when we sighted the enemy at a position of 11 o'clock, slightly above us (a group of 15 to 20 Zekes). After we dropped our belly tanks, Lieutenant Kirby, in his capacity as squadron leader that day, led us in to a head-on attack, climbing slightly. I selected one Zeke at the right of the formation and began firing. He started smoking and rolled out and down to his right. I followed, firing intermittently, to 18,000 feet, then pulled back to rejoin our formation.

I lost my second element and my wingman by this time. My wingman could only drop one belly tank, and because of this could not pull out of his dive until he reached 4,000 feet. He saw the Zeke that I had fired on going straight down, still smoking. I pulled up behind Red Flight at 21,000 feet and arrived in time to see two Zekes attacking from a position of 4 o'clock high. After I had fired at them in an attempt to drive them away, four other Zekes started down on me from 6 o'clock high, forcing me to dive to about 1,000 feet.

I had begun a climb when I sighted two Zekes at 3 o'clock and about 1,000 feet below me. I dived to attack, getting several shots with no results observed. I was at 18,000 feet when three Zekes from 8 o'clock high attacked me. As I was diving out, one closed in to very close range, putting about two slugs into the cockpit and possibly other parts of the ship. My evasive maneuver in this instance was to increase my dive to vertical, diving to 7,000 feet, then pulling back up to 12,000 feet.

At that time I saw seven Zekes in a loose formation and to the rear of a P-38, which appeared to be in trouble. As one Zeke began his pass at the P-38, I made my attack on him at 90-degree deflection. I fired a long burst and saw him break into flame. Feeling that I could distract them from the P-38 by making an attack, I pulled up slightly and to the right, getting a direct tail shot. I closed to about 100 feet and began firing. The Zeke immediately started burning and rolled slowly to the left and down. The remaining Zekes attacked and hit me at that time.

One was about 100 feet behind me and closing. As I started to dive out, my left engine began to burn, my right engine was smoking, a cannon shell burst into the radio compartment, and a 7.7 shell hit my wrist and passed into the instrument panel. Other shells hit at the base of the control column. I received shrapnel in my right arm and my hips. I tried to pull out of my dive, but found my elevator controls were entirely useless. I then released my escape hatch and bailed out. I landed in the sea about 25 miles from shore and remained there for approximately 30 minutes. I was unable to inflate my life raft due to shrapnel holes in it. I was picked up by a Navy PT boat, No. 152, and carried to PT tender Hilo in Buna Bay. During the engagement I saw at least 30 enemy fighters and clusters of bombs that had been dropped about 28 miles offshore."

McGuire went on to become one of the finest pilots in the Air Force. His skill at controls of a P-38 was legendary. During his spare time he wrote a  book on combat tactics for the 5th Air Force. Tom scored his final four victories on 26 December 1944 which put him two victories behind  Maj. Richard I. Bong, the USAAF’s ace of aces. 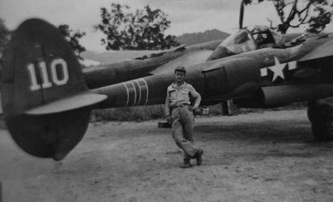 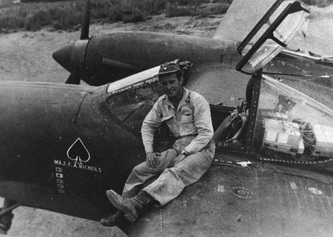 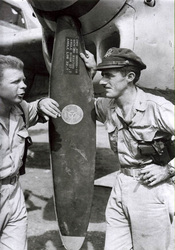 On January 7, 1945, McGuire was leading a group of four P-38s over a Japanese-held airstrip, Fabrica aerodrome, Negros Island. After descending through cloud cover, McGuire’s flight attacked a lone Ki-43 “Oscar”. Another Japanese aircraft, a Ki-84 “Frank” became involved in the combat and McGuire attempted a turn at low altitude while still retaining his auxiliary fuel tanks. His P-38 stalled and went in exploding on impact.

In March of 1946 McGuire was posthumously awarded the Congressional Medal of Honor. His citation reads:

He fought with conspicuous gallantry and intrepidity over Luzon, Philippine Islands. Voluntarily, he led a squadron of 15 P-38's as top cover for heavy bombers striking Mabalacat Airdrome, where his formation was attacked by 20 aggressive Japanese fighters. In the ensuing action he repeatedly flew to the aid of embattled comrades, driving off enemy assaults while himself under attack and at times outnumbered 3 to 1, and even after his guns jammed, continuing the fight by forcing a hostile plane into his wingman's line of fire. Before he started back to his base he had shot down 3 Zeros. The next day he again volunteered to lead escort fighters on a mission to strongly defended Clark Field. During the resultant engagement he again exposed himself to attacks so that he might rescue a crippled bomber. In rapid succession he shot down 1 aircraft, parried the attack of 4 enemy fighters, 1 of which he shot down, single-handedly engaged 3 more Japanese, destroying 1, and then shot down still another, his 38th victory in aerial combat. On 7 January 1945, while leading a voluntary fighter sweep over Los Negros Island, he risked an extremely hazardous maneuver at low altitude in an attempt to save a fellow flyer from attack, crashed, and was reported missing in action. With gallant initiative, deep and unselfish concern for the safety of others, and heroic determination to destroy the enemy at all costs, Maj. McGuire set an inspiring example in keeping with the highest traditions of the military service.

In addition to the Congressional Medal of Honor McGuire was awarded Distinguished Service Cross three times, two Silver Stars, six Distinguished Flying Crosses, two Purple Hearts, and 15 Air Medals. McGuire AFB was named after him in January, 1948. In 1949 Major McGuire's remains were recovered from the Philippines and returned to the USA. On 17 May 1950 he was buried with full military honors in Arlington National Cemetery. 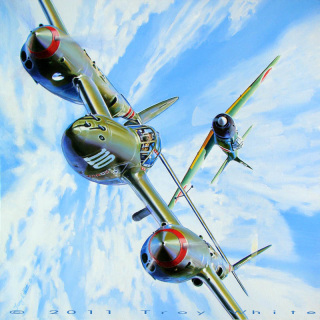