Wing Commander Clive Caldwell and Squadron Leader Bruce Watson looking for Japanese gun positions.
"Caldwell and Watson" by Troy White Oil on Canvas 16" x 48" © 2006 For Sale
For canvas prints click here.
To relive the frustration of flying ops in an area far away from enemy aircraft aircraft Wing Commander Clive Caldwell and Squadron Leader Bruce Watson would often go out as a pair looking for Japanese gun positions in the mountains on various Halmahera islands. Usually one aircraft would go in close to draw some fire while the other watched to see the muzzle flashes. Once the target was identified they would then be able take it out. Bruce and Clive were good mates during the war and this friendship continued right up until Clive died in 1994. In “Caldwell & Watson”  the mateship between the two men is portrayed by the proximity of the Spitfires  to each other with both pilots making eye contact. The lush tropical environment that they flew in during early 1945 serves as a backdrop. 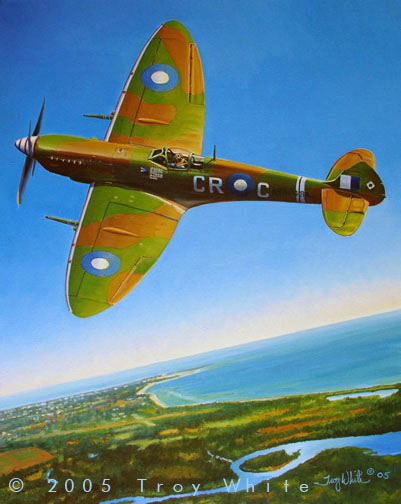 Clive R. Caldwell was Australia’s top scoring ace of WWII. He was born in Sydney on 28 July 1911. In 1940 he joined the Empire Air Training Scheme, and was awarded his pilot’s wings in January 1941.

Caldwell was sent to the Middle East, posted to No. 250 Squadron, RAF which was equipped with Curtiss P-40 Tomahawks. He scored his first victory, against an Me 109 on June 26, 1941. A few days later, on the 4th of July 1941 Caldwell’ close friend, P/O Donald Munro, was shot down and took to his parachute. As Caldwell watched a Luftwaffe pilot swooped in and killed Munro as he drifted toward the ground. Subsequently Caldwell began killing Germans who bailed out of stricken aircraft. He also had a penchant for strafing German troops on the ground to avoid returning to base with unspent ammunition. When the Press got wind these practices they gave him the moniker “Killer” which remained with him for the rest of his life.

Caldwell also became known for practicing deflection shooting by targeting the shadow of his own aircraft on the desert floor. His score rose steadily and by Christmas of 1941 his score stood at 16 and 2 shared victories. His biggest day came on December 12th when he shot down JU 87 Stuka dive bombers.

On 24 December, Caldwell posted a damaged claim for an Me109 which was piloted by Luftwaffe ace, Hpt. Erbo Graf von Kageneck (69 kills) of III./JG 27. von Kageneck  managed to nurse his damaged Messerschmitt back to base but died of his wounds a few days later. Shortly thereafter Caldwell was given command of 112 Squadron, RAF. Caldwell scored four more victories before being sent back to Australia. With Japan having entered the war, experienced airmen were needed at home. It would be nearly a year before he flew in combat again.

Upon arrival in Australia Caldwell was made Wing Leader of No. 1 Fighter Wing, which comprised three Spitfire squadrons. He scored 8 more confirmed victories against the Japanese while flying the Spitfire MkV in the defence of Darwin. In August 1943, he was awarded the DSO, taken out of combat and appointed Chief Flying Instructor at an operational training unit. 1943 his score stood at 28.5 where it would remain for the duration of the war.

In May 1944 Caldwell was appointed Wing Leader of No. 80 Fighter Wing. The unit was based at Morotai in the Halmahera islands and equipped with the new Spitfire Mk VIII. There was little enemy air activity within the range of their Spitfires and their mission was mainly to attack unimportant but heavily defended ground targets for which their liquid cooled Merlin engined Spitfires were ill suited for. The Aussie pilots protested to their leaders Canberra but their objections fell on the deaf ears of who they called the “Shiny Bum Brigade”

During the construction of the RAAF base at Morotai Caldwell had been forced to trade liquor to American troops in order to secure essential materials which the RAAF could not provide. When Caldwell was implicated in the “liquor for supplies” racket the “Shiny Bum Brigade” had their chance to disgrace a national war hero and they took it. In the subsequent court martial Caldwell was reduced to the rank of Flight Lieutenant. His appeal failed and Caldwell resigned from the RAAF in February 1946.

After the war, Caldwell became a partner in a successful fabric importing business in Sydney. He passed away in August of 1994.  . His final score was 28.5 enemy aircraft destroyed 14 probables and 13 damaged. Clive "Killer" Caldwell was the highest scoring Australian of WWII and the top scoring P-40 ace of all time. His awards include the DSO, DFC & Bar and the Polish Cross of Valour. 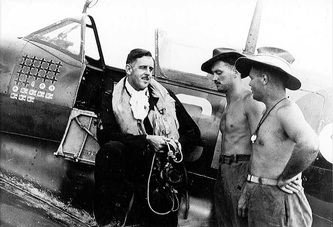 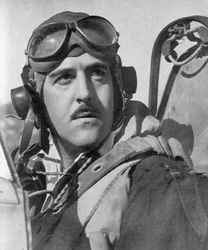 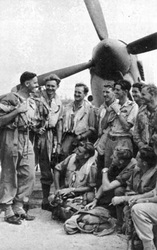 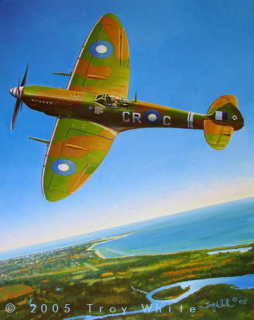