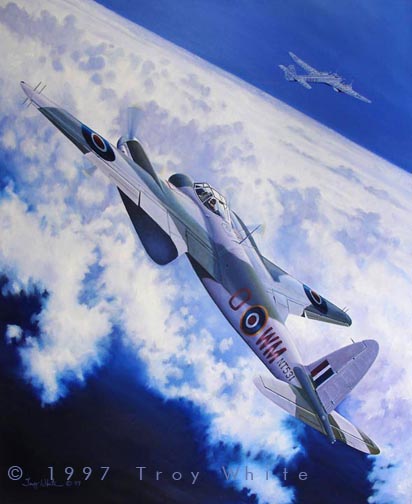 RAF Flying Officer Eric Loveland of 68 Squadron stalks a JU-88 intruder in his NF30 Mosquito with navigator Jack Duffy on the night of 16-17 March 1945. The German intruders were attacking airfields in East Anglia in March of 1945 as part of their last ditch effort in the waning war. In the moonlit sky and with the help of radar, Loveland was able to connect his gunfire with the JU-88. Confirmation was not possible since the encounter was at night and over the water, so Loveland was awarded a probable kill for his hit on the JU-88. Records show that these Luftwaffe raids were over by the end of March, so Loveland and Duffy chased away one of the last Nazi intruders to attack England during the war.